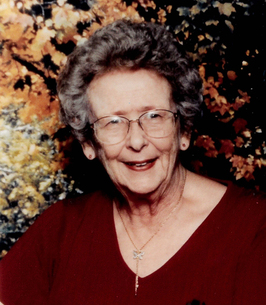 Erma Jean Depe Griggs Hamill, 89, of Colby, died Friday, August 5, 2022, at Citizens Medical Center, Colby. She was born April 5, 1933, in rural Brewster, KS, to John Fredrick and Freida Ann Bertha (Mushman) Depe. Erma was baptized in the Immanuel Lutheran Church, in Goodland, KS. Erma lost her father when she was seven years old. Her mother worked hard to raiser her and her younger brother John. Erma attended the Colby schools through junior high. Her first job was the fountain manager at A.L. Duckwalls. On February 1, 1949, Erma and James Millard Griggs were married, in Colby, by Judge Henry Goetch. Jim and Erma farmed and raised and butchered their own hogs, cattle and chickens. In 1952 they moved to Colby. It was while living on the farm that Erma had her first experience wallpapering and painting rooms, which would later become her occupation. She worked independently and for contractors for 17 years. In 1964, Jim and Erma built a new home, doing much of the work themselves. In 1969, Erma was stricken with diabetes and cancer. Through the quick action of Dr. Horning, the cancer was caught in time. During her recovery, she began oil painting. Then, in 1974, Erma attended Colby Community College, where she completed their GED program. She attended CCC for three years, taking all the art classes available and even earning two scholarships. In 1976, Jim and Erma put an addition on their home and opened “Erma’s Arts and Crafts Gift Shop”. She taught art lessons out of the shop and also taught Art out-reach for CCC. The Historical Society adopted one of her drawings for their emblem and her artwork can be found on the cover of several books. Erma served as president of the local High Plains Art Club, which was a very active group that traveled to and held many national shows.

On February 4, 1981, Jim died of a heart attack. After that, Erma began helping her daughter at the Colby Bakery decorating cakes. She also took up roller skating at the Skyline Skating Rink, West of Colby. She had loved skating as a child at the Jack Reed Skating rink, and she was very good at it. In 1983, Erma sold her home and closed her business. On November 23, 1983, she married Matt Hamill. This is when Erma began to do woodworking and tole painting. After Matt died on April 21, 2004, Erma sold their home and moved to an apartment. Once again, she began painting. In 2008, Erma had an art show at the Prairie Museum of Art and History and has since donated many of her works to the museum.

Erma was preceded in death by her parents; husbands, James Griggs and Matt Hamill and sister-in-law Frieda Depe.

A graveside service will take place at 9:00 a.m. Tuesday, August 9, 2022, at Beulah Cemetery, Colby, KS. Memorials may be made to the Prairie Museum of Art and History and sent in care of Baalmann Mortuary, PO Box 391, Colby, KS 67701. For information or condolences visit www.baaalmannmortuary.com