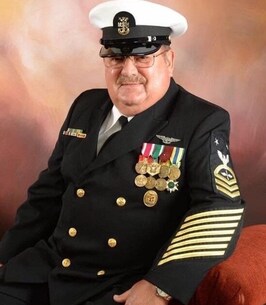 Sam graduated from Colby High School, Class of 1958. Following graduation, he served in the United States Navy, deploying to conflicts in Vietnam and Libya as an Aviation Warfare Specialist and a broadening assignment with the U.S. Navy Flight Demonstration Squadron, The Blue Angels in Pensacola, Florida. He retired from the Navy in August of 1990, after 30 years of honorable service, at which point he was one of the first enlisted Sailors to receive the Meritorious Service Medal. Sam was a loyal member of the VFM, Shriners Hospital for Children, Masonic Lodge, and a Blue Angel Alumni. In 2006 he married his wife Lavilla Deloviar, settling in Pensacola, Florida. They would have been celebrating 16 years of marriage on June 26.

A remembrance service will be held at 2 p.m. Tuesday, June 21, 2022, at Oak Lawn Funeral Home, Pensacola, FL 32506, followed by a visitation beginning at 1 p.m. Friday, June 24, 2022, at Baalmann Mortuary, Colby with a graveside service at 2:00 p.m. at Beulah Cemetery, Colby, with full Military Honors. For information or condolences visit www.baalmannmortuary.com